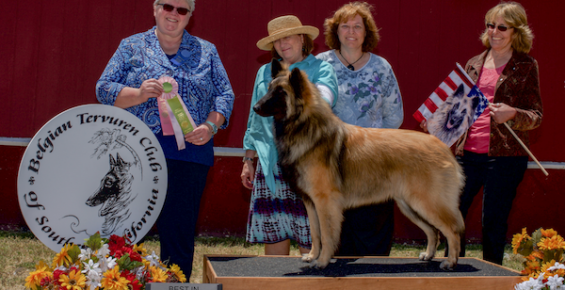 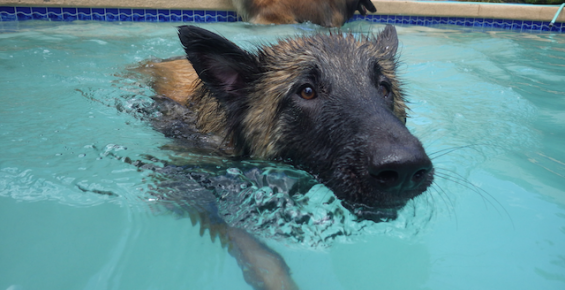 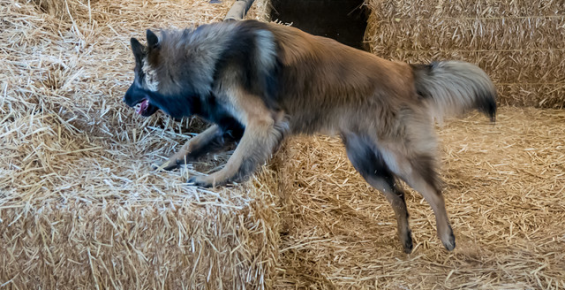 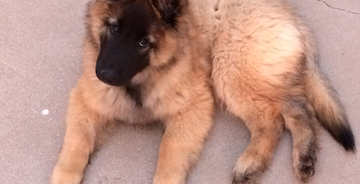 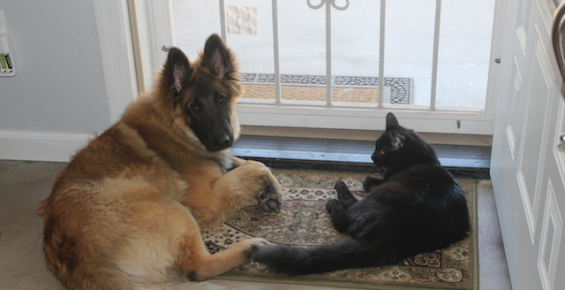 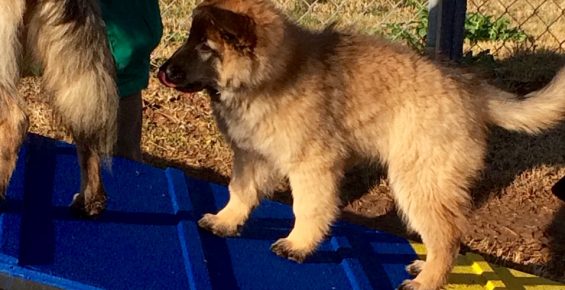 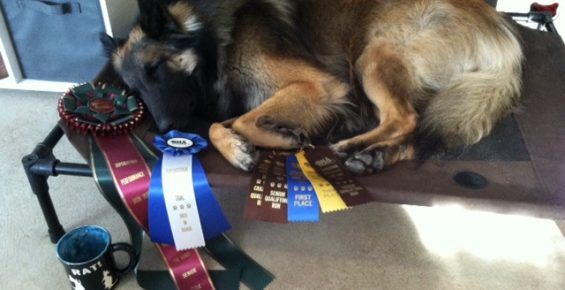 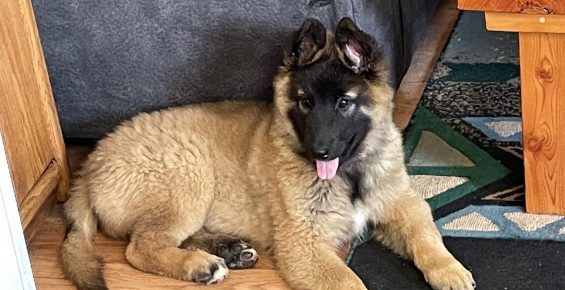 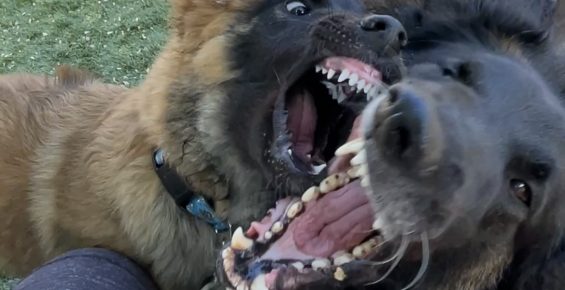 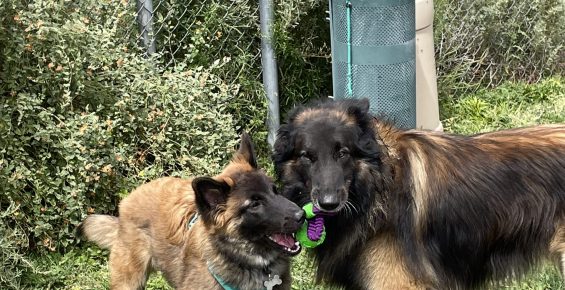 Khal has his own Horse Stuff page, Finn got his…. and now he has to share it with his daughter!

I saw my first Tervuren somewhere in the 90’s at the Scottsdale Arabian Horse Show. A man walked into the Schneider’s tent with a pair of the most beautiful red and tan dogs I’d ever seen and I was a goner. I knew they weren’t German Shepherd Dogs but I’d never seen the breed before and had to ask. Since then, there’s never been another breed that I was so determined to own sometime.

After remodeling the house, I fostered dogs for Soldiers Best Friend for about a year before I finally decided it was now or never to get my own dog. I found Vivant et Lisse breeder, Jo Fain, through the Internet and met Finn, his brother Bounty, and mama Sprite not long after that. Finn came home with me in January 2016, a 12 week old fluffy ball of a puppy. The cats were not impressed but they eventually came around.  He’s down to only one feline companion now, Aithne, a medium haired black cat who is older than him by about 6 months.

Finn is a show dog and has achieved his championship. The titles after his name are: Beginner Novice Obedience, Rally Advanced, Farm Dog Certification, FastCoursingAbility (1000 points in FCAT),  Scentwork Containers Novice, Scentwork Interiors Novice, Scentwork Exterior Novice, Rat Champion X8 in Barn Hunt (80 master Q’s over the champion requirement), Canine Good Citizen Advanced, Trick Dog Intermediate.  He also has non AKC titles of Barn Hunt Crazy 8’s Platinum 4, North American Sport Dog Association scent work and the Do More With Your Dog tricks group. He has excelled at pretty much anything we try, my handling ability being the only thing holding him back!

What Finn really loves is Barn Hunt! This is a scenting type sport where live rats are placed in ventilated tubes and hidden in stacks of straw. The dogs have to search out the rat tubes and alert the handler. There are decoy and empty tubes that the dog has to ignore. This is really an over simplification of the sport as there are a lot of guidelines and regulations to follow to keep the rats and dogs safe. Finn had his first introduction to a rat in September 2016 on our way back from a trip to Michigan. We started competing in late October 2016 and he moved up from Novice to Open to Senior to Master in just 7 months! He earned his RATCH title one year to the date from getting his Novice title! Each of the Novice, Open and Senior runs have a different number of rats to find in a certain amount of time and require 3 qualifying runs to earn the title. Masters could have a random number of rats (determined by the judge) and requires 5 qualifying runs to earn the RATM title. After that, titles are earned for every 10 qualifying master runs.  As of 09/2022 he has his RATCHX8 title (80 additional qualifying runs after obtaining the RATCH).  He also has his Crazy8’s Platinum 4 title which is 8000 points in Crazy 8s runs.  He is the first Tervuren in America to reach this level in Crazy 8’s! In Crazy 8’s, there are 8 rats in the ring and points are earned per rat found plus going through the tunnel and doing a climb, all in just 2 minutes. Points are deducted if the dog does not tunnel or climb or hits on a decoy tube. The maximum number of points per round is 100. Titles in Crazy 8’s are earned at each accumulation of 500 points. Finn truly loves this sport, becoming a whirlwind of tan and mahogany fur flying around the ring and digging in the straw to find his rats. He’s so much fun to watch, and really gives me a work out keeping up with him in the ring!

Quite by surprise, I found out that a photo of Finn taken during one of our runs with the Ratters of Arizona in New River, AZ by GoDogPhoto.com was selected to be the cover photo on a comprehensive book about Barn Hunt. We were thrilled! Check out the book here… barn_hunt_a_game_of_hide_seek_for_dogs

The newest addition to the household is Larkin, Finn’s daughter.  Officially she is Snowflower’s Infinite Heart of the Desert.  We bred Finn in February 2022 to Snowflower’s Total Eclipse of Mya Heart “Mya” owned by Peggy Woolworth in WA and puppies were born in April.  There were seven puppies in the litter and I had not intended to get one though I did eventually want a puppy from Finn.  Life has other plans of course and it worked out that I was able to get Larkin.  She is named after the small, dragon-like creature in the Stormlight Archives by Brandon Sanderson.  The larkin creatures can ingest stormlight which is the fictional society’s main money source!  Tongue in cheek that she is going to drain my budget LOL.  But the larkin creatures are also ancient guardians of a source of power so that’s good too.  In Irish, Larkin means Fierce and she is all that.  She is rarely still.  Finn has resigned himself to her presence here and tolerates her over-the-top play with him.  I can’t keep his mane clean because she is always pulling on it and slobbering all over it.  The cat however, is really upset.  She will only get close to Larkin when Larkin is in her pen or crate, and hisses at her any other time.  Larkin would like to be friends but Aithne is having none of it!

Larkin has been introduced to barn hunt already and I do think she is going to be just as good as her daddy at it.  We can’t compete until she is 6 months old but that’s coming up soon so things are going to get interesting around here! I also plan on getting her involved NASDA and AKC scent work as well as whatever else she seems to have an interest in.  She is quite a nice looking puppy as well (yes I’m biased but other people say so too!) so we’ll be showing in conformation too.

For you dog lovers, check the Snuffle Mat page for my latest addition to the things I sell.  These are durable rubber mats with fleece strips tied on. You sprinkle dry treats or kibble on it, shake it down a little so the treats are hidden and let your dog forage away for the treats. It is a nice brain activity for your dog to earn his treats. Trainers also recommend using a snuffle mat to calm and focus your dog in stressful situations or at competitions. Finn loves his but usually only take a few minutes to dig out all the treats!