In 2015 I undertook a major remodel of my house. Well, not me, I hired a contractor to do it! Since the plans involved leaving just two of the interior walls left standing, I figured it was “a bit” beyond a DIY project. With the contractor dealing with the house, I embarked on a few DIY projects that I knew I could handle.

First was an idea I had while watching tips for building a simple frame for a trellis. I thought, why make a frame when you can use a ready made one? So I visited a few used furniture and hotel liquidation places and found this really huge, gaudy mirror. 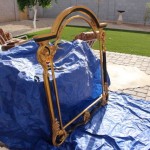 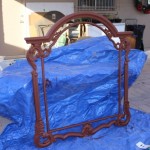 Then I strung framing wire through several eye screws I put into the back of the frame and hung it on the back wall of the house. As the two climbing roses grow, they will be trained into the frame. 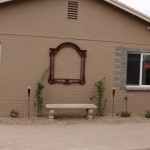 It turned out very nice so I did two other frames, not as gaudy or huge, but still nice. These two Mandeville plants are quickly growing into the frames and I’m hoping to have open blossoms on them soon to get the full effect of having the flowers in the frames. 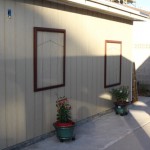 The next project involved finding some fun, inexpensive glass dishes and consuming a few bottles of cider 🙂 I glued the glass dishes together then glued them onto the inverted bottle. Placed on garden stakes, these will nicely hold my rechargeable LED tea lights. You can see them in the finished frame picture above too around the garden bench. 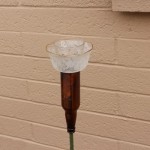 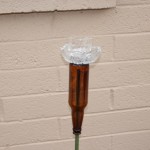 The other project I have finished to date finally put to use a couple of antique milk crates I’ve had sitting outside the garage for years. With the new layout of the living room I decided not to use a traditional coffee table. But knowing that we would still need something to put drinks and such on, I decided to put the milk crates on wheels and put a top on them. Of course the idea expanded a bit, thinking I could make the top reversible to be a table top on one side and a cushioned seat on the other. It was a bit tricky as these milk crates had a non-removable wire frame inside with cleats that stuck up to interlock the crates when stacked. I had to use wood thick enough to cover the cleats and drilled holes to accommodate. Covering the holes while still allowing room for the cleats was awkward but it worked out pretty good so I now have two little rolling storage/table/seat units! I still have one more to finish, but decided to try a bit of glass mosaic tile on it and have gotten side tracked from finishing it with moving into the house… 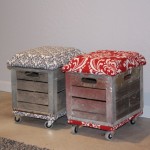 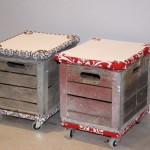